It Will Find You - Devlog 4: Interaction Systems

So for my fourth devlog I thought I would start discussing some of the systems you'll be seeing in It Will Find You, and how they've evolved from Captive Audience.

The first system I want to discuss is the interaction system. If you've played Captive Audience, or most horror games, you'll be familiar with the pickup, rotate, and place interaction system for objects. For It Will Find You i've expanded on this system a bit to give it more versatility, clarity, and variety in how you interact with objects.

Highlighting is one of the most prominent additions to the system, and now provides a clear visual effect to illustrate what objects can be picked up and moved about. Using a mixture of transitional shaders and raycasting, interact-able objects now light up when targeted with a pale blue aura (the colour may change), allowing the player to locate key objects more easily.

This highlighting is then toggled based on what the player does once the object is picking up. After initial collection, the shader will turn off, allowing the player to see the object in its natural state, with appropriate lighting based on the area.

This brings us to our second system element, inspection mode. By toggling the R key players can then rotate objects to investigate them further, finding attached items, hidden messages, or simply admiring the furnishing in Julia's home. During this inspection mode the object again becomes highlighted and unlit, allowing a clearer view of the object that isn't hindered by poor natural light in the area. I'm still experimenting with whether the highlight should be active during this mode, so let me know what you think! 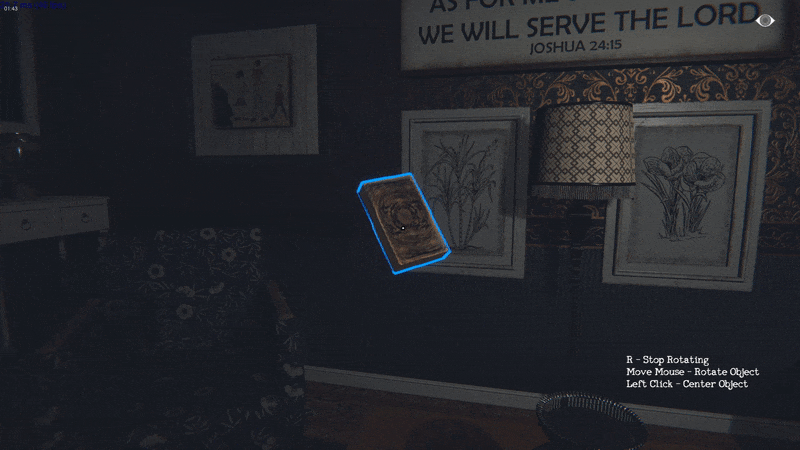 Once a player is finished with the object, or found where it needs to be placed, they can either drop it where they stand, or throw it with a variable power gauge depending on how long the right mouse button is held for. This ties into the monsters detection system which i'll discuss in a later devlog, but in short thrown objects can be used as distractions, so allowing varied throwing power became an important tactical element. 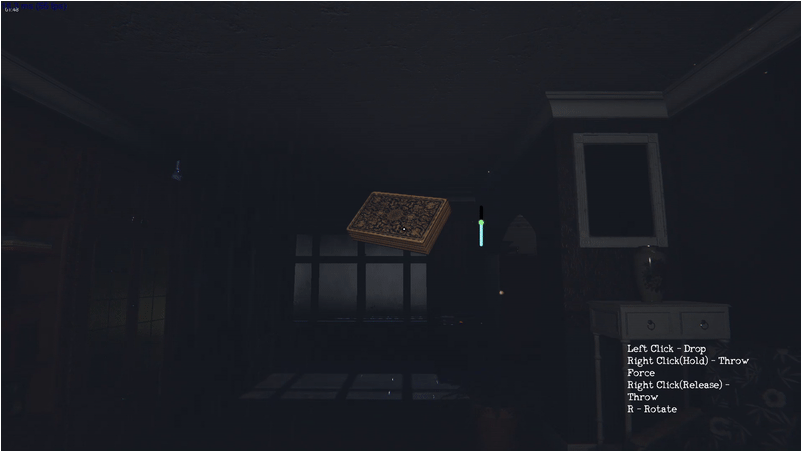 As this has already gone on a bit,  i'll pause here and continue with the variants to this system in Devlog 5, but let me know your thoughts on the system, and what you'd like to see.

Thanks for tuning in, see you next time!